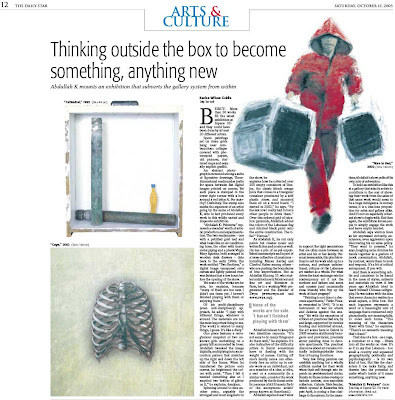 "Thinking outside the box to become something, anything new"
Abdallah Ko mounts an exhibition that subverts the gallery system from within

BEIRUT: More than 30 works fill the latest exhibition at Espace SD and they could have been done by at least 20 different artists. Spare paintings set on clean grids hang near rambunctious collages covered with photocopied papers, old pictures, cluttered maps and sexually explicit graffiti. An abstract photograph is mounted among a suite of figurative drawings. Three-dimensional readymades jostle for space between flat digital images printed on canvas. Yet each piece is stamped in the lower right corner with a box around a red letter A. For anarchy? Definitely. The stamp also marks the signature of an artist going by the name of Abdallah Ko, who in fact produced every work in this wildly varied and disparate exhibition.

"Abdallah Ko: Peintures" represents a decades' worth of artistic production and experimentation. The two readymades - one with a petrified gold leaf and what looks like an air conditioning hose, the other with heavy metal piping and a plastic Virgin Mary figurine, both arranged in wooden desk drawers - date back to the early 1990s. The work entitled "Two Brothers," a digital image transposed onto canvas and lightly painted over, was finished just a few hours before the opening of the show.

Yet none of the works are for sale, he explains, because "many of them are too new. I didn't use them yet. I haven't finished playing with them or enjoying them."

Of his multi-disciplinary (even anti-disciplinary) approach, he adds: "I play with different things, whatever is around. The materials are not the most important thing to me. [The work] is related to many things, I guess. It's like a diary."

One piece features a retro-glamour snapshot of two unknown girls sunbathing on a grassy hill surrounded by trees. Abdallah tweaked the image digitally, multiplying into an accordion pattern that stretches up the right and down the left side of the frame. When he transferred the picture onto canvas, he brightened the colors with paint. "Then I felt it needed something else so I emptied two bottles of glitter on it," he explains, deadpan.

Spinning around to face another piece, arguably the strongest and most enigmatic in the show, he explains how he collected over 200 empty containers of Bonjus, the classic kitsch orange juice that comes in a triangular container punctured by a stiff plastic straw, and mounted them all on a wood board. "I started in 2002," he says. "By the last row I really had to force other people to drink them." Over this ordered grid of juice-box pyramids, Abdallah added the colors of the Lebanese flag and drizzled black paint onto the entire construction. The title? "Heroes."

Abdallah Ko not only paints but creates music and writes fiction and poetry as well. He has a pile of as-yet-unpublished manuscripts and is part of a loose collective of musicians - including Mazen Kerbaj and Charbel Haber among others - who are pushing the boundaries of free improvisation. Abdallah studied architecture in Montreal and fine art and literature in Paris, he is a working web developer and co-founder of ZWYX (http://www.zwyx.org/). "It's not easy to do many things and do them well," he explains.

His name is also indicative of the difficulty artists in Beirut sometimes have in dealing with the weight of names. Cutting off one's family name can effectively free an artist up to create work as an individual, not as a member of a clan, a tribe, a sect or a community (in a similar vein, consider the work produced by the fictional artistic persona of Ali Hussein Badr or the anonymous artists' group known as Heartland.)

Abdallah says he doesn't want to support the tight associations that are often made between an artist and his or her family. Personal issues aside, this plus his refusal to sell his work adds up to a curious, and perhaps unintentional, critique of the Lebanese art market as a whole. For what drives the local exchange rate for contemporary art if not the mothers and fathers and aunts and cousins (and occasionally close friends) who buy up the work of their progeny?

"Painting is not done to decorate apartments," Pablo Picasso remarked in 1945. "It is an instrument of war for attack and defense against the enemy." Yet with the exception of critical art practices that are, by and large, supported by outside funding and exhibited abroad, the art scene here in Beirut in 2005 remains stubbornly bourgeois and provincial, precisely about painting done to decorate apartments. The practical discourse about art remains virtually indistinguishable from that of buying furniture.

Very few living painters can establish anything but a wholly artificial market for their work when their sell-through rate depends on predetermined circles. Rarely do those circles overlap or include serious, non-nepotistic collectors. Galerie Sfeir-Semler, which opened in Karantina this past April, is posing a fine challenge to the system. In the meantime, Abdallah's show pulls off its own acts of subversion.

To hold an exhibition like this at a gallery that asks its artists to contribute to the cost of showing their work from the sales of that same work would seem to be a huge indulgence. In money terms, it is a lose-lose proposition for artist and gallery alike. And it's not an especially coherent show to begin with. But then again, the exhibition forces people to simply engage the work and leave empty handed.

Abdallah says visitors have so far expressed curiosity, annoyance, even aggression upon discovering his no sales policy. "They want to possess," he says, laughing as he clutches his hands together in a gesture of mock consumption. Abdallah, by contrast, wants them to look and respond. It's a bit of critical entrapment, if you will.

And there is something subtle and consistent to be found in the mess of styles, subjects and materials on view. A few years ago Abdallah tried to teach himself Chinese calligraphy. He was taken with the idea that every character resides in a small square, a little box. But each logogram represents a word or a meaningful unit of language that is connected only phonetically, not meaningfully, to older such forms. "The meaning of the characters floats with time," he explains. "There's no semantic meaning that's fixed."

That idea of a box - as a cage, a container or a trap - filters into all the works on view. It's as if to say that Lebanon - too small a country and squeezed geographically, politically and psychologically - is its own kind of box. But like the characters it too lacks fixity, and therein lays the potential to make what's inside of it mean something, anything new.